Color when it is suffused with light that has a luminosity and intensity that I utilize in my work. Light that has movement, it illuminates and transforms the environment with color.

My interest is in the interaction of color and shape when the attribute of light is added, the structure is based on affinities and inclinations between and among the elements.

My art revolves around the language of painting, light, and color in the contexts of the times and places where the works were made, contexts that inevitably influence my choices. Through my varied and diverse approaches to making art—painting, installation, public art, writing, and other projects—I participate in two ongoing dialogues. The first and more immediate dialogue is with the viewer when I place my images in their field of perception. I am part of an historical continuum of artists who use color and are involved with light. 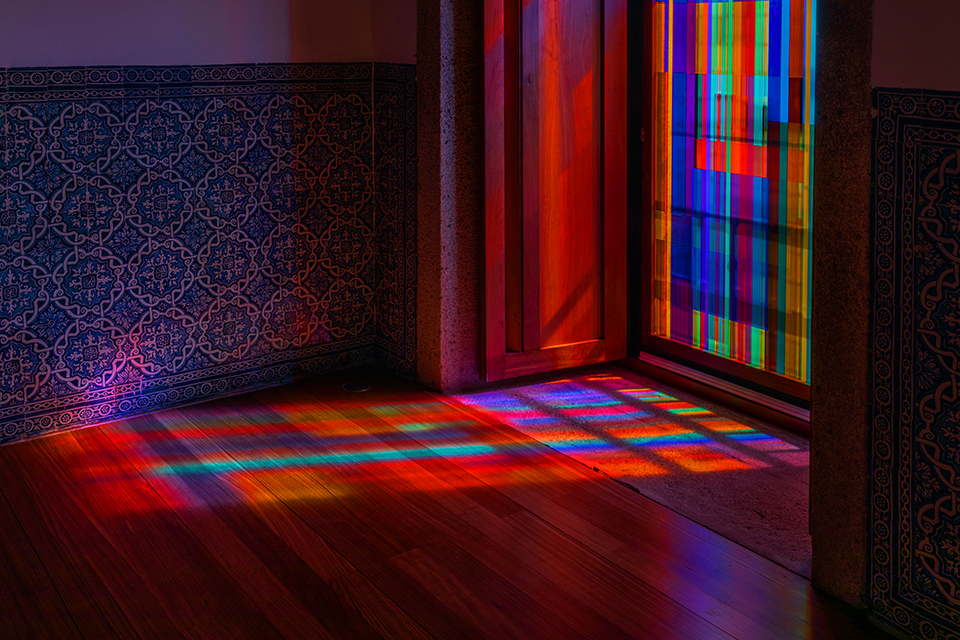 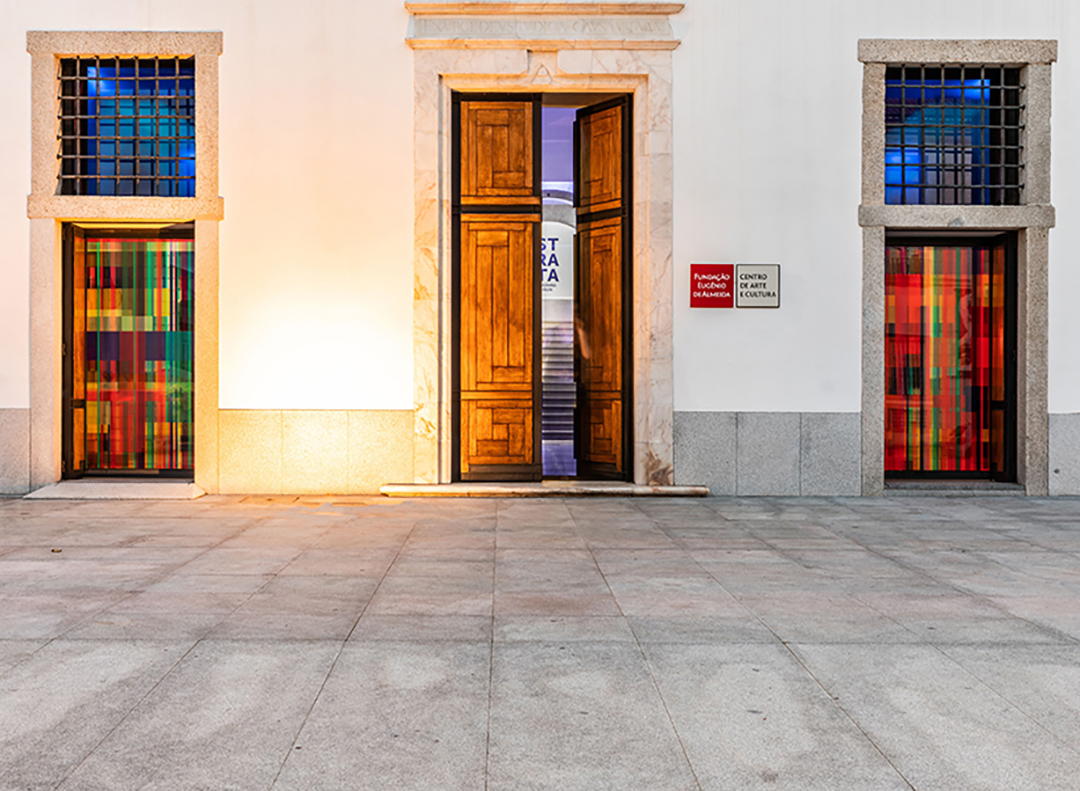 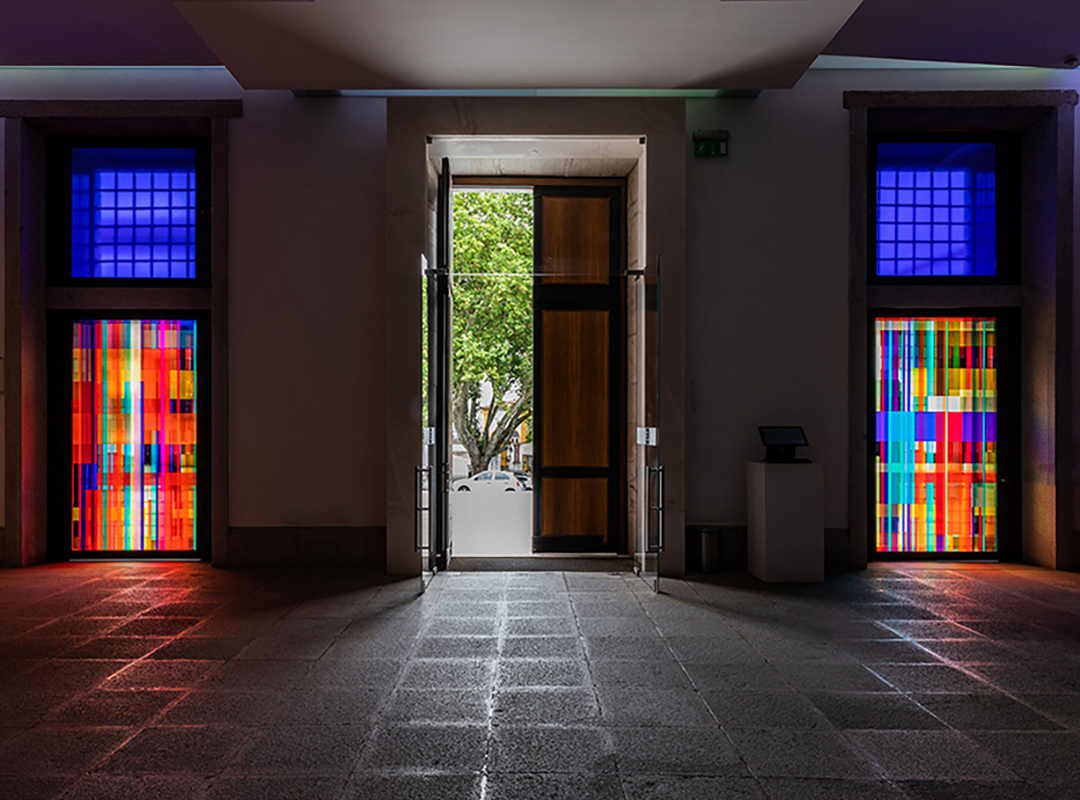 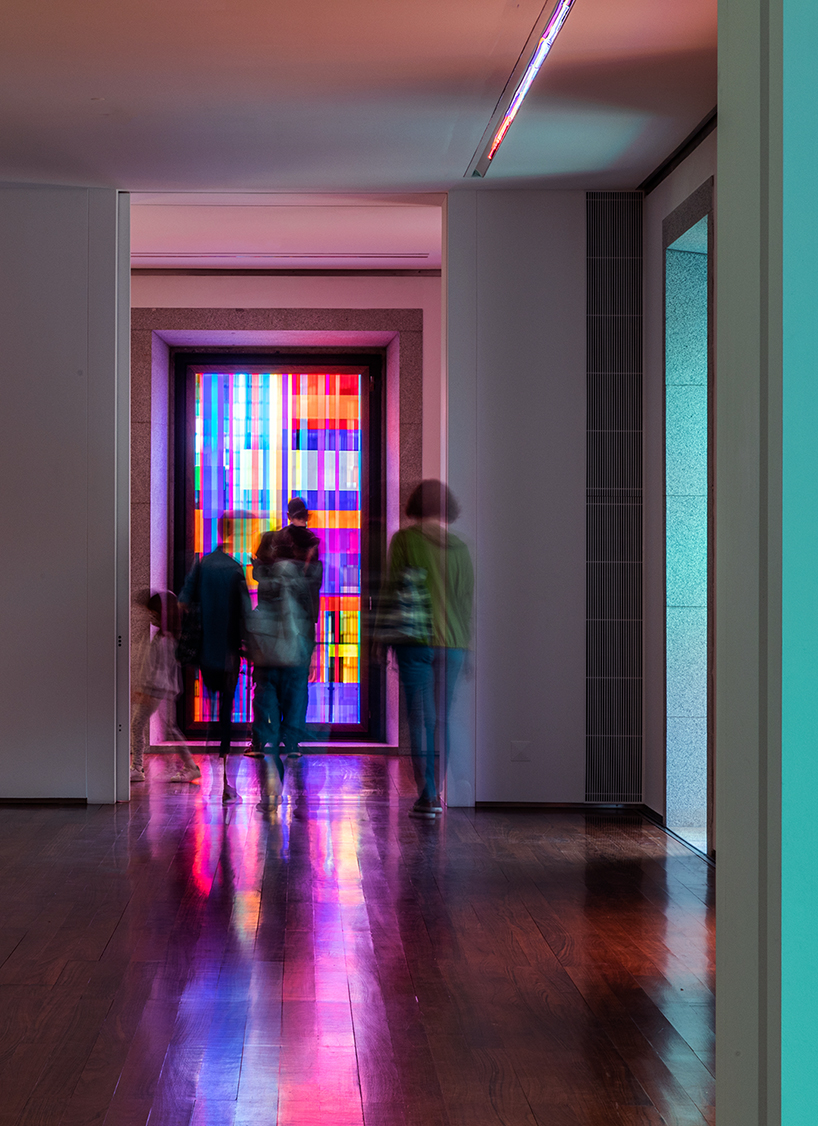 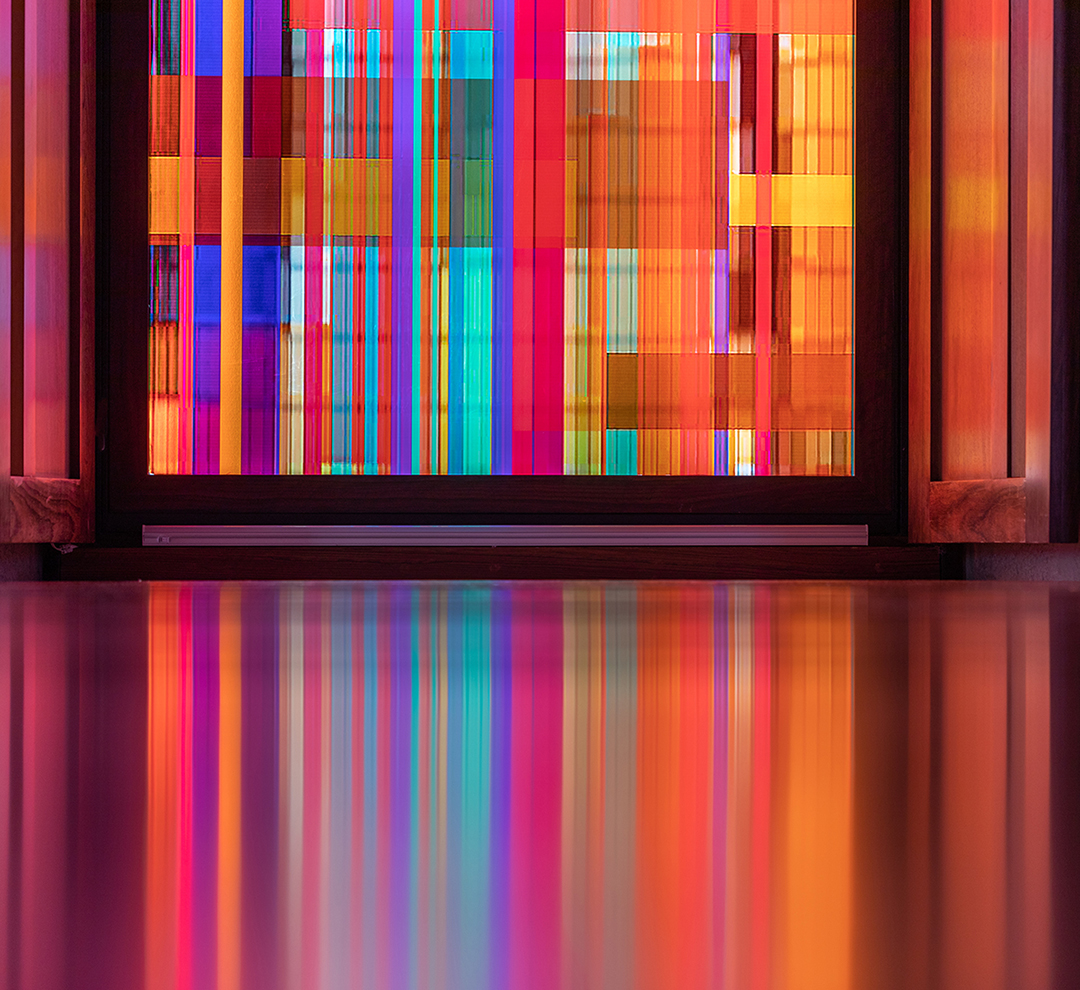 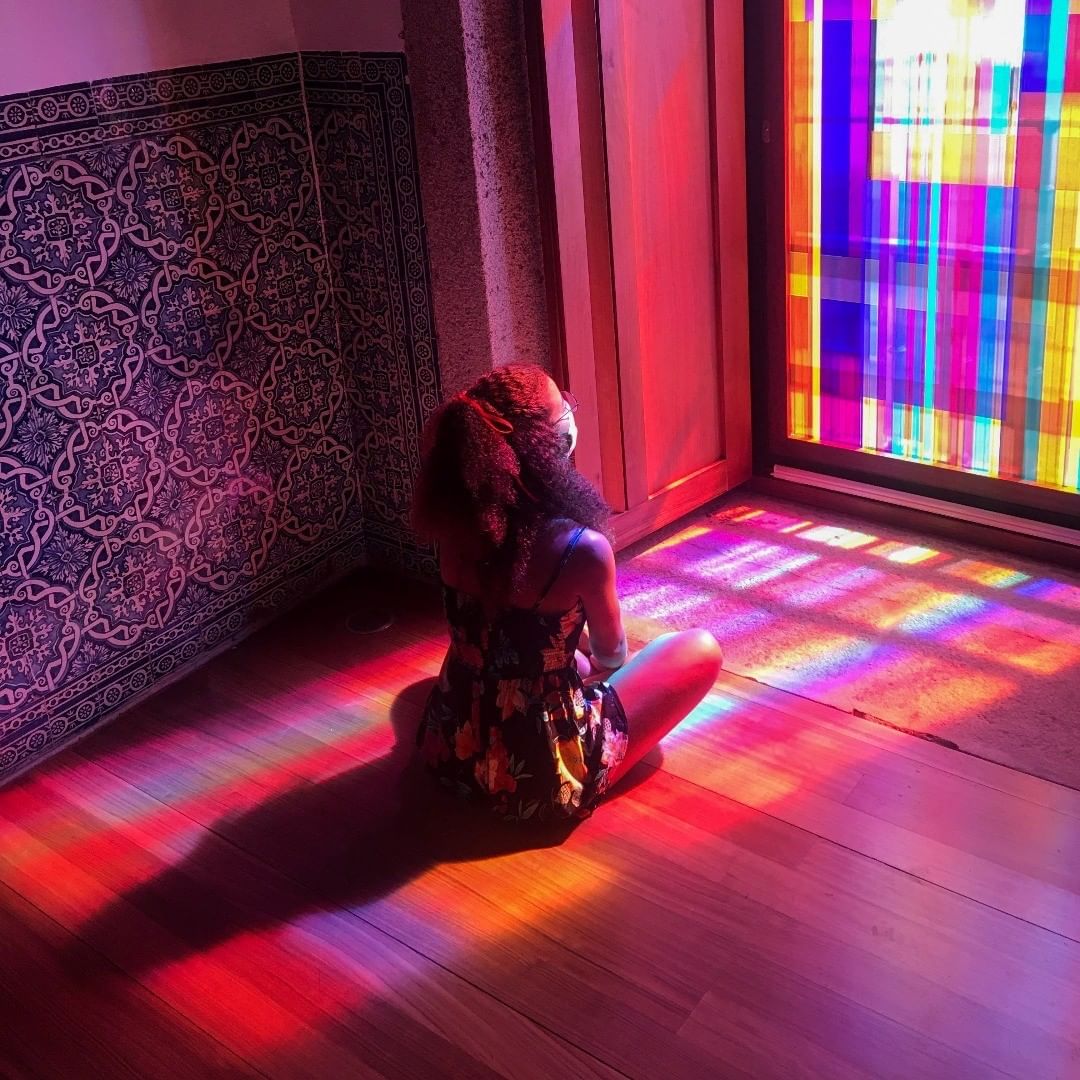 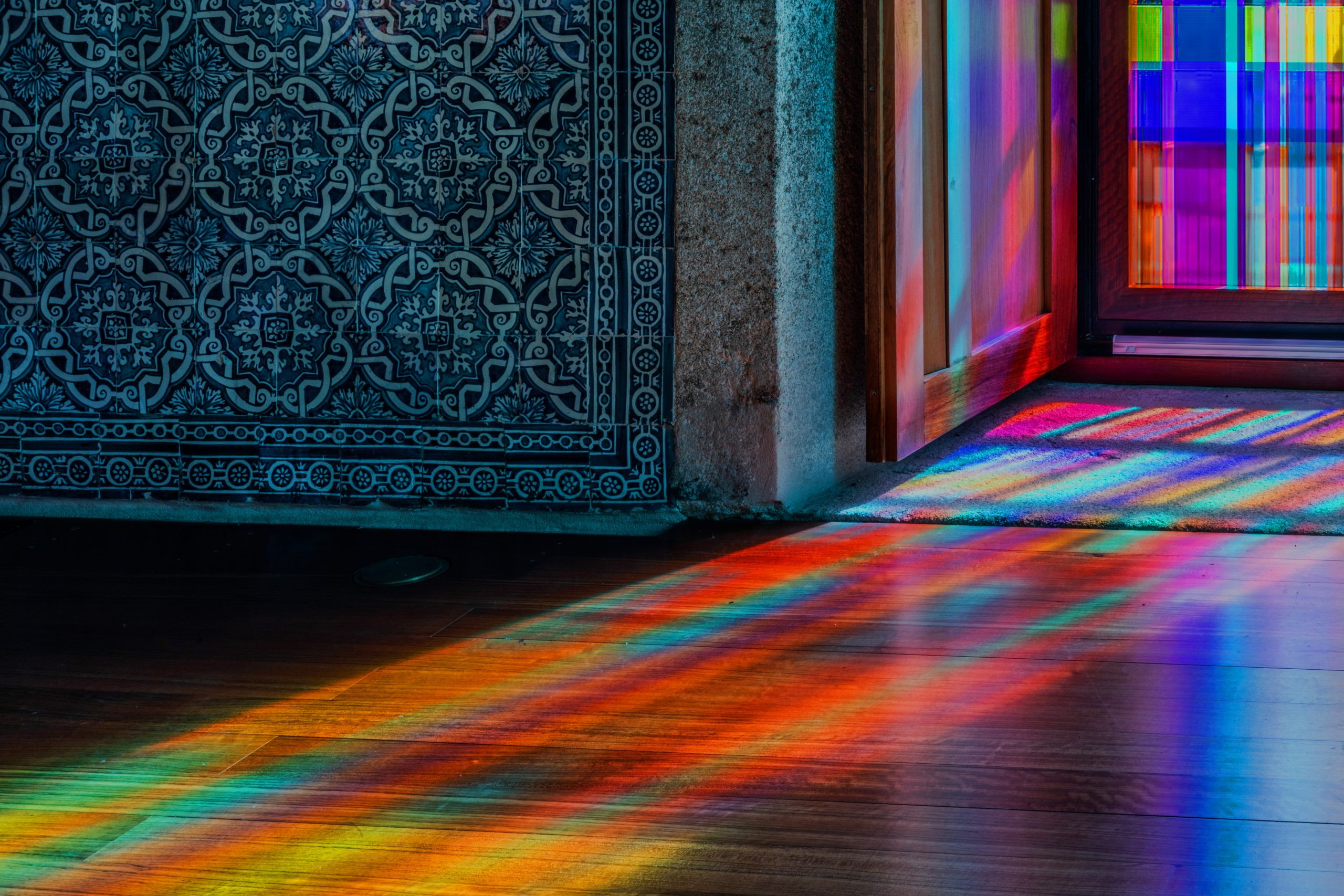 1. What comes first, what comes next
If we could operate a vertical cut in a given portion of land, we would be able to observe the successive layers of sediments that, overlapping over time, materialize the very idea of ​​History. When the Danish Nicolaus Steno (1638-1686) first verified it, in the distant seventeenth century, he stated an ancestral principle according to which the deepest layers of strata [in the plural in Latin, strata], corresponded to what oldest deposited there. History makes the earth’s crust grow, indexing accumulation over time and the actions of human beings and nature.

2. Cidade-Strata
Nicolaus Steno made his discovery in Rome, thus adding to it a deep vertical existence. And maybe all cities have a little bit of Rome. Évora is definitely a city ​​strata, based on multiple layers of cultural, social and political strata. Without even going down to the geological depths, we find in its composite monumentality, the vertical lines outlining the thin horizontal line of the present. We could think of a past that insists on not disappearing according to the natural order of things. More certain, however, is to live a present that does not let the past disappear, stubbornly navigating the routes of heritage and history.

3. Colors
Deanna Sirlin captured the city’s axial depth with her primary creative material: color. The artist has already narrated, on several occasions, the remarkable physical experience of color since her New York childhood, a physicality that presides, until today, to her mixed-media painting and creation works. His printed digital compositions display color in combinatorics that result from accumulation and overlapping processes, displacement and juxtaposition, free experimentation and axial vectoring. The color lines, recurrent in his work, are distributed in horizontal and vertical layers, corresponding to the archaeological modeling of the city-strata. A chromatic stratification that calls the visitor to the history of the city and, in particular, to the history of the building of the Old Palace of the Inquisition, with which he dialogues in the first instance.

4. Contemporary Stained Glass
Strata can thus be read as an immense contemporary stained glass. Without resorting to the figurative, it is the historical configuration of the times of the city that thus materializes. It is history that, with the color distributed in abstract and formal geometries, spreads through the walls of the galleries on the first floor in the light of daylight, and spills outside during the night, increasing the enjoyment of the work and the questions that it launches over the city.

5. Immersive Environment
Strata installs a chromatic density in the rooms on the first floor that contrasts with the presence of two small oil paintings – Holding and After (both from 2020, created for the exhibition). This tension makes it possible to identify, strictly speaking, the visitor’s observation act, inviting him to establish a connection between the pictorial space and the real, contiguous, interior and exterior space. Like a transitive variation in classical painting, immersiveness places the observer within the expanded pictorial space, in a chromatic dive with the city in the background. And she is there, waiting for our gaze …

BIOGRAPHY
Deanna Sirlin was born in Brooklyn, New York, and holds an MFA Painting from Queens College, CUNY and a BA in Art from SUNY Albany. Sirlin has received numerous awards, including a Rothko Foundation Symposium Residency, a grant from the US Department of State, a Yaddo Foundation Residency and a Creative Capital Warhol Foundation Award in the Art Writing Mentorship Program. Sirlin had solo exhibitions at The High Museum of Art in Atlanta; at Ca’ Foscari Venezia, in Venice; at The Centre for Recent Drawing, In London; The Contemporary in Atlanta; and M55art in New York. Her work was commissioned for exhibitions at The New Orleans Museum of Art and The Georgia Museum of Art, and is regularly referenced in international media. Her current exhibition is Deanna Sirlin: STRATA at the Fundação Eugénio de Almeida in Evora, Portugal.

View all posts by Deanna Sirlin

What do you think about this? Cancel reply

Find the resident or publication

Use simultaneous translation for convenience